How Would Your Life Change If You

Could Refine and Build

Your Energy Levels Every Day?

We all want to all want to be fully alive. Imagine if you could get more connected to your body and give your body an energetic exercise everyday. There are hundreds of qigong sets available today and dozens of tai chi styles … But, there is only one Opening the Energy Gates of Your Body Qigong which has been around for literally THOUSANDS of years.

“As a result of meeting Bruce Frantzis in 1992 I am currently enjoying a quality of life I was informed I would not have following a partially successful major heart operation. Although my lifestyle is restricted, I believe that the Tai Chi and Qigong routines, especially Cloud Hands from the Energy gates have enabled me to stay mobile & active, to continue working and keep my medication well below that taken by others in my position.”

This New Energy Gates Training Set is based on three live events and takes you step-by-step to learn the precise movements.

Through qigong, you work with the energy and qi of your body to loosen your muscles and build power, strengthen your organs, improve cardio-pulmonary function, strengthen your nerves and improve your vascular function.

“This extraordinary book, written by one of the West’s greatest living masters, offers nothing less than a course in the miracle of our own energy field. Bruce Frantzis has translated ancient Taoist practices into a modern program that manages to be both highly accessible and transformational, affording us all the opportunity to experience the wonder of the Tao firsthand.”

—Lynne McTaggart, author of The Field and What Doctors Don’t Tell You 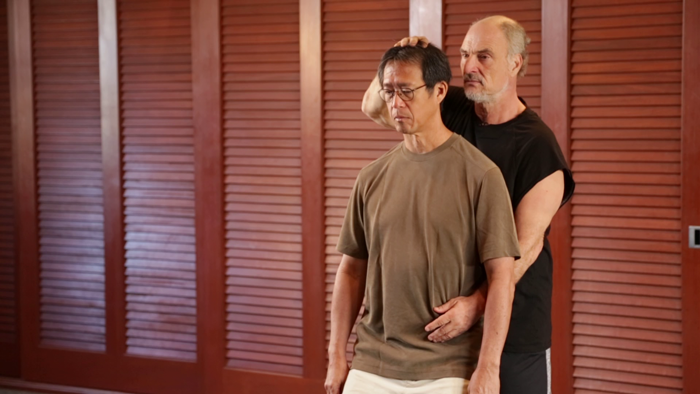 The body alignments incorporated within the standing and sitting postures for the core qigong exercises are fundamental to all Taoist energy practices. These are the basic physical alignments that allow your body to relax. They enable fluids and chi to flow in a smooth, balanced manner. They teach you how to stand and sit properly. Tension that has locked into various parts of your body contributes to poor posture and may cause physical discomfort, such as back and neck pain. Practicing these exercises will gradually enable you to move your body into correct alignments, relax your tension, become healthier and free your energy. Through the standing you will learn how to dissolve the ‘energy gates’ in the body where qi flows. These energy gates include: 1. Bai hui, or the crown of the head. 2. The third eye, the eyes, the center of the ears, and the temple. Also, the four jaw points. 3. Where the tongue touches the roof of the mouth and the throat notch. 4. The base of the skull and in between each of the cervical (neck) vertebrae down to the seventh cervical vertebra at the base of the neck. 5. From where the tongue touches the roof of your mouth to the end of the breastbone, on a line about the width of your mouth. 6. The four points of the shoulder. 7. The elbows. 8. The wrists. 9. The hands. 10. The joints where the ribs connect to the sternum, the spaces between the ribs, the joints where the ribs connect to the spine, the area between the shoulder blades and the spine. 11. The solar plexus. 12. The whole of the belly, starting from the front and dissolving through the internal organs back to the spine. 13. The tantien and the mingmen. 14. All the points along the spine, from the occiput to the tailbone, paying special attention to the occiput, the seventh cervical vertebra, the vertebra in the center of the shoulder blades, the one at the base of the shoulder blades, mingmen and the tailbone. 15. The hip sockets, the pelvic bones, and the kwa (that is, the area inside the front crest of the hip bones). 16. The anus. 17. The genitals. 18. The perineum. 19. The knees. 20. The ankles. 21. The feet. 22. Below the floor. 23. Above the head 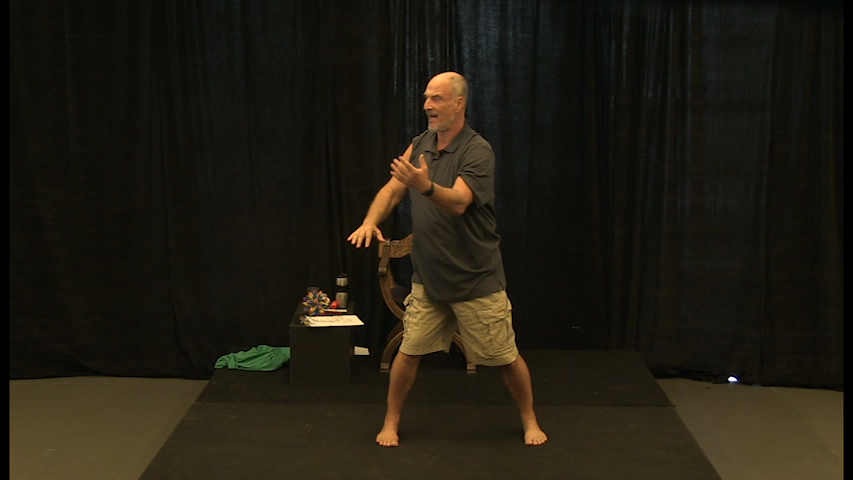 Cloud Hands contains all the same essential energy elements that make tai chi chuan the highly effective system of healing that it is. If you could only practice one single move for health, Cloud Hands would be it. It involves both the arms and the legs in forward, backward, upward and downward movements. Cloud Hands includes all tai chi’s basic twisting, turning, bending, and stretching motions, and begins the process of lengthening the tissues of the body. Although there is no shifting of the weight, forward and back, the weight does shift completely from one side to the other. Thus, Cloud Hands contains the basic process of moving from empty to full, i.e., one leg becomes empty (of weight) as the other becomes full. The principles learned in Cloud Hands also apply to hsing-i, bagua and the vast majority of qigong and neigong exercises.

“This remarkable book has become a classic. Mr. Frantzis’ biography alone is worth the price of admission.”

The next three exercises (swai shou in Chinese, and generally referred to as “the Three Swings” in English) have the basic function of energizing the upper, lower, and middle internal organs, as well as fully opening up the joints of the hips, shoulders, elbows and hands.

The Three Swings involve the three burners, or jiao, of the body. The lower jiao, which begins below the lower tantien and extends down to the floor, is primarily concerned with the functioning of the legs, urinogenital health, the large intestine and the kidneys (which are also influenced by the middle burner).

Each of the Three Swings energizes one particular burner. The First Swing has the primary function of opening the chi of the lower internal organs, the urinogenital area, the stomach, and the intestines.

This Swing will be of particular interest to people with constipation, sexual weakness, and kidney difficulties—both in terms of Western and Chinese medicine—and is particularly helpful for those who have cold and clammy hands and feet. 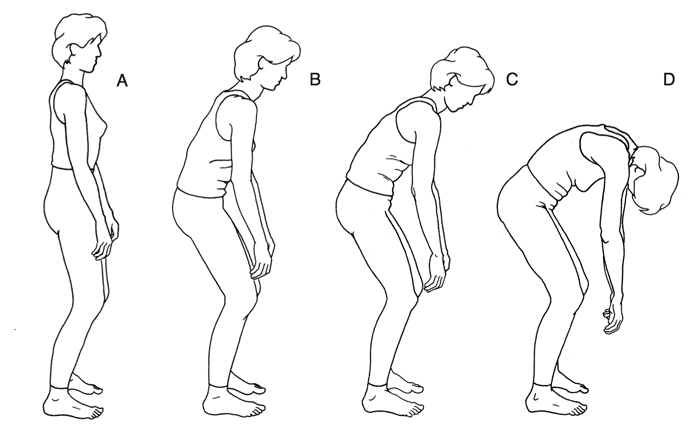 The methodology of the Spine Stretch, which derives from classical Taoist body practices and which is integral to the performance of tai chi chuan and the other internal martial arts, is quite different from the common back stretches found in Western exercise or yoga classes.

Common back stretches essentially employ a rolling motion, where from a standing position, the head and neck, then the chest, then the mid and lower back, collapse as the upper body moves progressively closer and closer to the floor.

This is the exact opposite of what you will be doing in the Taoist Spine Stretch. First, you will learn to feel your spine and distinguish the muscles from the actual vertebrae. Most people can barely feel their back except when it aches. In fact, many people in the West cannot even feel the muscles of their back. Next, you will learn to slowly bend from the kwa while keeping your spine and head straight.

Finally, you will learn to release tension from within the vertebrae, while you are both bending and straightening. This exercise will help strengthen your legs and hips, without putting any pressure on your back.

“A must read (Energy Gates Qigong) for those who are new to qigong, those who are already practitioners, and anyone interested in complementary medicine or self-help.”

Plus you’ll get the following Limited Bonuses:

You will get access to an additional class that will be posted online on the subject of Energy Gates Dissolving and the Emotions. This class and the third swing classes will be held in Maui, Hawaii after the program opens and if you are ‘in the neighborhood’ they will be free as a member. They will be recorded and uploaded both as additional video content.

Within the program, the Third Swing is shown but because of its difficultly is not shown in extreme detail. We will be holding at least one additional class on the Third Swing so that you have the best change to learn and improve on this important movement in this qigong set. Here is everything you get in the program…

Here’s a Summary of what you’ll receive…