The Difference between Tai Chi & Qigong

Oftentimes, the question arises at retreats and from students : “What is the difference between qigong and tai chi?” So, let us explore this question, understanding that this is a more complex matter than it seems and one that cannot be fully answered in a few simple sentences. This is because there are literally hundreds of styles of qigong (chi gung) and ﬁve major schools of tai chi, each with numerous variations.

This is a lot of tai chi and a lot of qigong from which to make a simple statement. Accurately distinguishing between them is like separating out all the color ﬂows and shadings within a single, beautiful but complex painting.

There is another issue that muddies the waters and makes answering this qigong question difficult. Many obtain information on the differences and similarities from a local qigong or tai chi instructor, or from a Chinese instructor who cannot translate from one culture to another easily, or one who may not want to share what has been secret, etc.

The trouble is that instructors may only know details about the speciﬁc type of qigong they do, and not other types or its relationship to chi-energy arts as a whole. This is not unusual, just as in the ﬁeld of science, biologists often don’t know that much about civil engineering, and vice versa. As a result, misinformation and half-truths abound.

Anything of truly great value always has great subtlety, whether or not it looks simple and easy on the surface. Some other differences not mentioned here are too technical, and will not be covered as they may confuse rather than clarify. To bypass complex technical issues, just as is done when you want common sense to tell you how computers work, we will look at the four most commonly given simple answers to the original question—What is the difference between tai chi and qigong?

Each answer provides a progressively more complete answer. All are only partial truths, but at least they are the most accurate answers that can be given without going into excessive detail.

Level 1: Tai chi is a form of qigong, or qigong is tai chi’s parent

This is the most common answer.

The accurate part of the statement is this: The invisible chi or internal power aspects included within the tai chi part of tai chi chuan derive directly from one branch of the 3,000-year-old Taoist qigong tradition, whereas Taoist qigong does not come from tai chi. However, the statement is misleading because it omits Buddhist or Confucian qigong, which have little in common with tai chi’s roots in Taoist qigong or Taoism.

This answer also involves a common error in logic: Since to the Western ear it sounds as if the word energy is contained in both words, they must mean the same thing. Right? Wrong! The qi, or chi, of qigong means energy, the chi of tai chi does not. In tai chi, the chi means ‘ultimate’.

To add to the confusion, the chi in tai chi and qigong are almost universally pronounced by Westerners as “chee,” which is accurate for qigong and inaccurate for tai chi (“gee”) chuan. Commonly, those who both see and mispronounce tai chi as chee, also tend to assume both mean the same thing, which they do not.

Confusion escalates and gets reinforced when you ﬁnd out both tai chi and qigong work with chi-energy (however, often in different ways) and have similar beneﬁts. Adding to the potential confusion, although many people may have heard the name, most in the West have only seen tai chi or qigong in still photos, on television, or at the cinema.

When shown visually, if these arts are even named, some narrators inaccurately call both tai chi, because they don’t know the difference. This commonly leaves the impression that qigong is tai chi or vice versa. The public subsequently has an association that slow-motion movements plus Chinese something-or-other equals tai chi. Consequently, the public and the media are more familiar with the name tai chi than qigong, and commonly do not make much distinction between them.

Click here to learn more about the history of qigong: The Five Branches of Qigong. 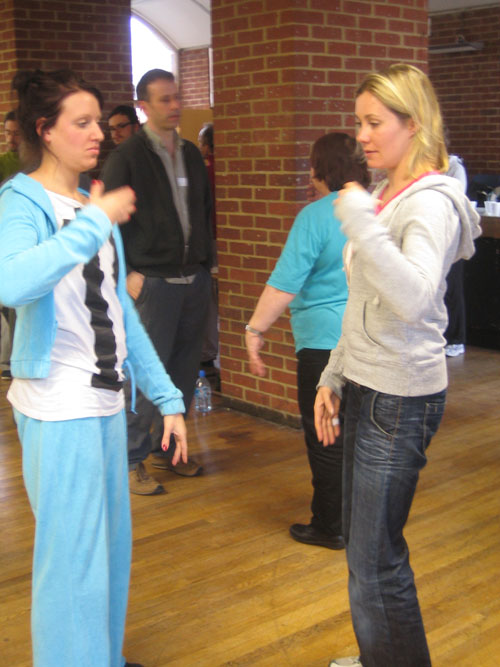 Level 2: Tai chi is a martial art, qigong is purely for healing

The accurate part of this statement is that qigong has speciﬁc techniques or styles that are particularly effective for speciﬁc diseases beyond the ken of tai chi. For instance, there are speciﬁc qigong methods for helping those with cancer and mitigating the effects of radiation and chemotherapy. In China, one set used for this was Dragon and Tiger Medical Qigong.

The misleading part is that, although all tai chi powerfully heals and maintains health, only a tiny fraction of participants do any of its practical martial-arts techniques. On the other hand, qigong also has within it practices for increasing the power you need to make self-defense techniques effective, even though qigong per se does not include the ﬁghting techniques, themselves.

The second part of the answer is this: just because tai chi and qigong movements are done in slow motion does not mean that their movements must basically be the same. There is an exceptionally wide range of different movements, each requiring different kinds of physical coordination. Moreover, although the slow-motion movements of different tai chi styles may be somewhat different, on the whole they are basically variations of the same theme.

In contrast, slow-motion movements in a particular qigong style can look radically different from either tai chi or other qigong systems. Take, for example, two well-respected members of the Taoist qigong tribe—tai chi chuan and Wild Goose qigong. Wild Goose has as many moves as a tai chi long form, yet looks radically different from tai chi. Likewise, non-Taoist medical and Buddhist qigong systems also contain movements not to be found in tai chi or each other.

There are many ways to move the body, as can be seen in the differences in the dance world between styles of ballet, ballroom, tap, disco, and hip-hop. Like dance styles, within the hundreds of qigong schools you can move in other ways besides regular, smooth, slow-motion movements. There are techniques which involve shaking, jumping up and down, vibrating, shouting, alternating speed with staying dead still, ﬂapping like a bird, squatting ﬂatfooted, and even moving freely and spontaneously in ways almost too strange to describe, while making weird, otherworldly sounds.

Above and beyond moving, qigong also has primary methods that specialize in:

Although tai chi may use standing, sitting, and lying down techniques, they are ancillary to the primary technique of slow-motion movements for health, longevity, and stress management. 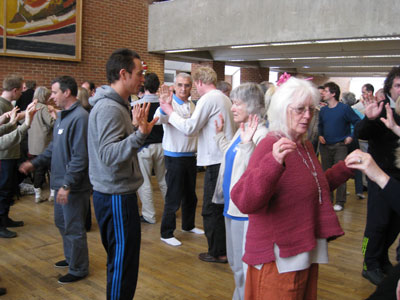 Level 4: Tai chi and qigong may work with chi-energy differently

Why are you doing these movements in the ﬁrst place? From a purely physical viewpoint the body needs to move and exercise to prevent problems. A different perspective is that the movements are designed to speciﬁcally promote the ﬂow of chi within you. Therefore, if you want to generate a speciﬁc chi ﬂow in your body, one type of movement may make it easier whereas others may make it harder.

Tai chi is based upon the potential to fully incorporate all 16 parts of the neigong system seamlessly into every movement; qigong normally tends to partially utilize some, but not all, of the 16 neigong components in any speciﬁc movement or entire form. In tai chi, although some speciﬁc moves may make it slightly easier to initially learn or solidly assimilate any one of the 16 components, for an advanced practitioner, the other 15 are ideally always present and integrated within each and every move of the form.

Some Taoist qigong schools will teach the entire 16 components initially through a series of short qigong forms, each of which emphasizes two or three speciﬁc parts of the neigong, until the ﬁnal form which encompasses all 16. After this the student has a complete background within which to engage learning the full energetic potential of tai chi. The Energy Arts Qigong Exercise Program, for example, does this in its teaching work, using five very short qigong sets plus Dragon and Tiger Qigong, the ﬁrst ﬁve of which initially emphasize only one to three components of the entire 16 neigong components.

Qigong also often separates speciﬁc chi functions into separate movements or differ­ent forms. For example, while doing a qigong form, during one move you might direct energy through a speciﬁc acupuncture meridian (the lung or heart meridian for example), and in the next move you might direct energy through a different meridian. Or in one move, you might draw energy through a particular acupuncture point in your body, and in the next release the energy from a different one. Or within the same form, during one series of moves, you could deliberately only exclusively activate and work with one of your three tantiens, or centers of energy, and later within the same form, in a different series of moves, deliberately and solely activate a different tantien and its functions, or other speciﬁc elements of the Taoist neigong system.

Ideally, in tai chi, an experienced practitioner will not separate these energy practices in this way. So, that provides you with four different ways of looking at the question. All have truth in them and help elucidate the difference between qigong and tai chi. May you practice well!