Traditionally, Tai Chi and Traditional Chinese Medicine (TCM) were connected and used in tandem in order to treat patients in China.

From the perspective of Traditional Chinese Medicine you can say there are two levels of healing injury, illness and diseases. The first involves hands-on energetic healing work, which can get rather complex with the thousands of meridian lines on the human body. The second involves specific qigong or tai chi exercises that can be taught and learned, and are oftentimes sufficient to heal a health issue.

But the question is: Can tai chi really heal specific health issues rather than just maintain a good standard of general health and enhanced longevity? Also, how can Tai Chi evolve into a health and healing art in the West?

There is a growing database of research on how Tai Chi is effective both as preventive medicine and to address specific health issues. See www.taichiresearch.com for a summary of studies.

Often an existing tai chi or qigong exercise set will do the trick for a specific health issue. There are many tai chi forms and qigong exercises that have been refined and developed for centuries, enduring because of their effectiveness. One of these qigong sets, Dragon & Tiger Medical Qigong, is based on moving your hands along your acupuncture meridians.

Alternatively, a high-level professional can design a movement exercise in the same manner that an herbalist prescribes formulas, whereby the prescriptions change over the course of the disease, illness or injury, healing.

In the same way, qigong tui na doctors and specialists create qigong movements or standing postures that enable a disease to be cured. This has been done for thousands of years in China.

The postures and movements to be done are largely determined by the stage of the disease and what is necessary and possible for a patient to arrive at the next stage of the healing process.

In my own training, I treated 10,000 patients as a qigong tui na doctor. Then, my teacher Liu shed more light on these methodologies since healing applications is one of the legacies of the Taoist lineage to which I belong.

But to get to the point where you can connect Tai Chi and Traditional Chinese Medicine requires intense and extended training. Lets look at what it takes.

We first have to consider the different categories of practitioners and what it is they each bring to the table in terms of health and healing.

The average tai chi instructor, who has reached some genuine level of proficiency in their own practice and who can teach, will be capable of explaining what most students need to heal themselves. This level of instruction will be sufficient for most students to heal minor injuries, aches and pains, and ward off small problems before they become big ones.

However, someone who knows Chinese medicine (i.e., a Chinese doctor) could take tai chi healing to the next level. That said most Chinese doctors (normally acupuncturists) don’t know how tai chi and qigong work as one of the eight specific branches of Chinese medicine. Just as a surgeon may not know about internal medicine or a guitarist may not know how to play the piano. In each case, they’re related, but they’re not the same.

So a trained professional of Chinese medicine will know about chi flows in the body and be able to offer a diagnosis accordingly. If this professional is also a tai chi practitioner, then it would be incredibly obvious on what areas a patient should concentrate his efforts when using tai chi as a form of medicine. 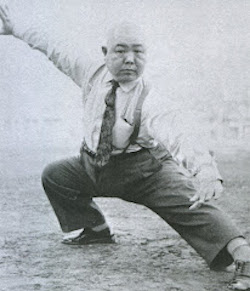 One of my teachers, Cheng Man Ching, a famous tai chi master from Taiwan who taught in America for a long time, was also a very, very good herbalist.

He brought this training to his teaching by showing his students movements based on their individual needs to bring about healing and health according to the principles of Chinese medicine. He himself had tuberculosis and used tai chi to heal it.

Deeper still, you have specialists who have the greatest depth of knowledge in their field. They can go on treating people in a clinical setting—prescribing herbs, qigong movements and offering qigong bodywork and acupuncture—to the tremendous benefit of their patients because they will recognize the nuances associated with their particular focus.

When I came back to the West, many people advised me just to treat people, make some money and work during business hours. But I chose to try and spread the internal arts and make them more available, so they can have a greater affect on many more people than I could ever treat in a clinical setting. Specialists are needed to fulfill both clinical and teaching roles.

Now, very often when I teach, I find that I can almost instantaneously see what people need because I had such a large clinical base during my training. I tell my students what to do in terms of their tai chi practice, but I won’t necessarily give them the 400, 30 or three reasons why they should do it.

Furthermore, anyone who trains regularly with me knows that when I teach tai chi, especially in my instructor certification programs, I don’t only teach the general movements—move your arm here and your leg there, or make your chi sink when doing this or that.

Instead, I try to help students understand why each movement is useful and how it can be applied for health and healing. I do this with the hope that I provide a context for tai chi for healing. Whether or not a particular tidbit of information is helpful to the students learning in the room, maybe they will take away the information to help others downstream.

So there are four levels of tai chi in the context of healing:

Most people only look at tai chi and qigong’s healing benefits from the perspective of physical therapy e.g., “I can heal my shoulder.” Tai chi’s healing potential goes way, way beyond that.

However, to go way beyond, a practitioner has to have a lot of training. I personally studied qigong tui na clinically for 10 years continuously, working on patients almost daily while I was in China.

Malcolm Gladwell wrote in his book The Outliers that it takes about 10,000 hours to become an expert in any field. The Chinese have a similar principle, which says that a practitioner must dedicate 10 years to their tai chi practice before they go outside the gate. They don’t mean 10 years until you’re a master, some great tai chi expert, but 10 years until you can say you’re a tai chi practitioner.

And, I’m talking about minimum requirements, which many tai chi teachers in the West simply cannot appreciate.

Even still, most tai chi teachers who’ve met this minimum requirement, and that also have knowledge about general health and longevity, could provide particularly useful instruction to help people heal certain conditions. Those who know a lot about Chinese medicine and are genuine tai chi practitioners could really help tai chi evolve into the health and healing art it was designed to be, especially in the West.